His second crime against the sport, many inside the game believe the Mexican should have been banned for life but after explaining away the presence of clenbuterol on eating contaminated meat, Alvarez was treated rather lightly, slapped with a six-month ban.

With fans robbed of a super-fight, attention turned to which unfortunate soul would replace The Cinnamon One and the name handlers came up with was Vanes Martirosyan. The little-known Armenian fighting out of California will face one of modern boxing’s most destructive punchers on May 5 at the StubHub Center, Carson. 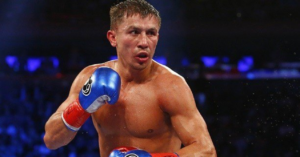 With a record of 36 wins against three defeats and a draw, even those with a passing interest in the noble art expect the night to live up to Martirosyan’s fighting handle – Nightmare. The contest may take place a few days after his 32nd birthday but Vanes won’t find GGG in a generous mood. Instead of gifts, he’ll be presented with earth-shattering hooks and crushing body shots from the man with an 87% KO average.

The underdog has never been stopped in 224 rounds of professional boxing, which may ensure this mismatch goes a little further than the first minute of the opening round. However, with three defeats already on his card, you’ve got to worry. Martirosyan has been beaten by Demetrius Andrade, Jermell Charlo and Erislandy Lara, the latter coming last time out for the WBA super welterweight world title in Vegas.

Searching through the current online betting rates and the fact Betfair traders offer a whopping +1400 on him winning the fight tells its own story. Even a draw looks unlikely with +3300 doing the rounds. Think the fight will go the distance? No, neither do the money men who shape the market at -500 on the bout finishing before the 12th-round bell; +300 the judges to be called into action.

Golovkin’s last two travelled the scheduled 12-round distance, that draw with Canelo being the most recent, but that was only the fourth time in a 12-year career he’s stood in front of the scorecards. Triple G has cut down major names in the division such as Kell Brook, Matthew Macklin, Daniel Geale, Martin Murray and David Lemieux.

Kell Brook – an undefeated welterweight world champion at the time of taking on Golovkin – ended with a career-threatening broken eye-socket inside five brutally short rounds. That explains why punters will find another KO/TKO -450 favourite. The points win is +333.33, while those looking to back the jolly just to win the fight should forget about it – there’s no more than -5000 on the table.

With GGG going in as a deeply frustrated figure, fans of the Kazakh-born gladiator will be desperate to see him record his first early night since battering Brook in London in September 2016. For the punter just a little more difficult to please, there’s a host of special markets on offer, including -162.50 on Gennady winning inside the first six rounds.